History takes us back more than 80 years to 1932 when Russell Kenneth Duncan, founder of Duncan Supply Co., quit his job with Frigidaire to pursue his dreams to open his own business. He and his brother Ralph saw an opportunity in the growing refrigeration industry and started Duncan Brothers Refrigeration Repair Company. It was the first, and soon became the largest, independent service business in Indianapolis, prospering in spite of the Depression. 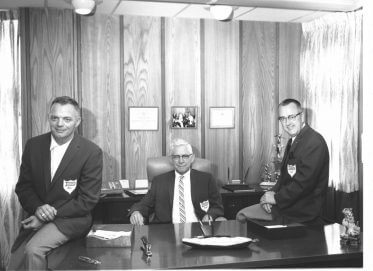 In 1936, Russell and his wife Mildred sold their interest in the company to his brother to concentrate on wholesale refrigeration parts distribution. The new business, Duncan Supply Company, was relocated to 937 N. Illinois Street in 1940 and was incorporated 7 years later. Russell K. Duncan was named President, Haslitt Lucas, Vice-President and Mildred M. Duncan, Corporate Secretary & Treasurer. Edwin E. Hunter was hired in 1937 to do the accounting and paperwork for the small but growing company. It was Ed who helped the company survive through Russell’s health issues, two heart attacks within a five-month period. Edwin retired as Duncan Supply’s Executive Vice President in 1986.

Kenneth Roberson Duncan, Russell and Mildred’s only son, literally grew up with the company. After his service in the Navy as a refrigeration technician, he joined Duncan Supply as a full time purchasing agent. Charles “Robbie” Roberson, Russell’s brother-in-law, joined the Duncan workforce in 1947. He was extremely valuable to the company as the residential refrigeration engineer and later Vice-President at his retirement in 1992. Timothy L. Hunter, Ed Hunter’s son, also joined Duncan Supply in 1967. Tim worked his way up to Vice-President and retired from Duncan Supply in 2010. As the business grew, we relocated again to a larger facility and CEO, Russell remained Chairman of the Board until his death in 1983. The business continued to grow with the addition of branches in Champaign, Illinois, and throughout the state of Indiana.

In 1999 Ken Duncan entered retirement and the reins were taken by Richard L. Fine, M.B.A. Rick started with Duncan in 1974, even before he had finished college or received his MBA. He worked in every department, from accounting to the sales counter, refrigeration engineering to purchasing, learning the industry and the company inside and out. He was the obvious choice to lead us into the future after Ken’s retirement. Under Rick the company saw exponential growth, including branch additions in Elkhart, Lafayette, and our Plainfield branch and distribution center, which opened in 2011 (our newest location).

Ken’s daughters Lisa Duncan Green and Linda Duncan Hendricks joined the company in 1992 and 1997 respectively. Upon their grandmother’s death in 2001 they became corporate officers, Treasurer and Secretary. “Robbie’s” son Randall L. Roberson, P.E. was hired in 1995. Randy came to Duncan after nineteen years with Carrier Corporation, Johnson Controls, Trane CSO and as an independent mechanical contractor. He has been invaluable to the company’s growth in HVAC distribution and has recently been named Vice-President.

Christopher Duncan Hendricks, Linda’s youngest son, joined Duncan in 2010 while completing his education, which in May of 2016 included a Master’s Degree of Industrial Distribution. He took over as President of Duncan Supply in May of 2019 upon the retirement of Rick Fine. Randy Roberson’s daughter, Dana Roberson Lurker, started in 2010, after completing her degree, and is working in Promotions and American Standard Warranty. Rounding out the fourth generation of family is Brittany L. Green, Lisa’s daughter, who joined us in 2013 after attaining her Bachelor of Merchandising and Business. Brittany is now the Administrator of General Warranty and Returns for Duncan Supply.

Since inception in 1936, Duncan Supply Company has taken pride in delivering the highest quality and best value to our customers.